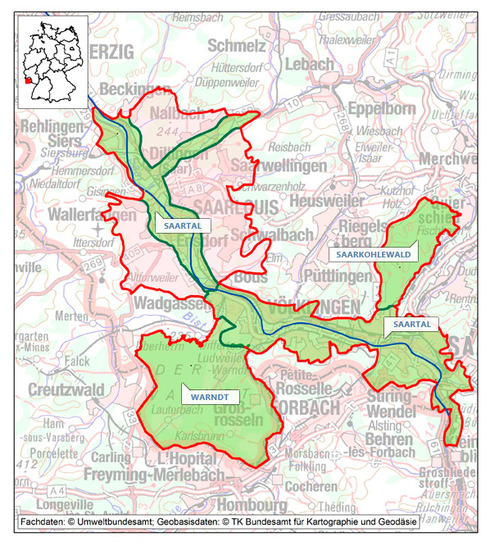 The Saarland conurbation developed with the rise of the industrialization at the beginning 19th century. Because of its extensive mineral resources it became a centre of mining and iron and steel industries. These activities went along with a severe environmental pollution typical for these industries. Nowadays, the importance of these old industries is decreasing while the automotive industry and its subcontractors, the ceramic industry as well as computer sciences and information technologies are gaining importance.

The early and intensive industrialization has led to an excellent traffic infrastructure. Furthermore, the small scale segmentation of large parts of the Saarland has resulted in a high per capita car rate in Germany.

Population density increased rapidly in the late 17th, early 18th and especially in the 19th century. Since the 1980s, however, the population declines.

The sampling area covers about 625 km2 and includes three polluted areas as defined in the Federal Immission Control Act and in the Polluted Site Regulation of the Saarland administration.