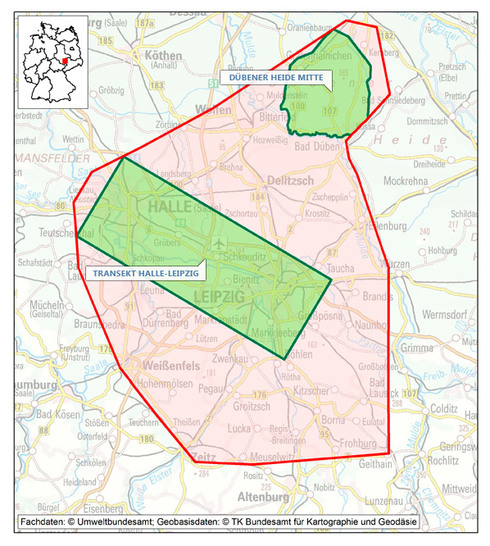 Region in the chemical triangle of Central Germany

The Leipzig conurbation is characterized by mining and strong industrial activities with a focus on chemical industry. This is accompanied by high population densities around Leipzig and Halle. The sampling area lies in one of the most polluted areas in Central Europe.

Distinctive features in the landscape include the forest of the Dueben Heath, the industrial conurbations, the areas of open-cast lignite mining and the post-mining landscapes as well as areas of intensive agriculture.

The landscape was originally shaped by the glacial period but is strongly influenced by anthropogenic activities nowadays. The water balance of the whole area is heavily disturbed by intensive mining. The Central German conurbation Halle-Leipzig-Bitterfeld is traditionally associated with chemical industry and biotechnology. Until World War II, the focus of the industrial development was on chemical industry and mining. In the 1970s, energy industry, plant construction, medical engineering and biotechnology followed. Today, the region is developing into the German centre of biotechnology and research.

The sampling area includes the Halle-Leipzig-Bitterfeld conurbation, the rivers Mulde and Saale, and large parts of the nearby forest Dübener Heide.