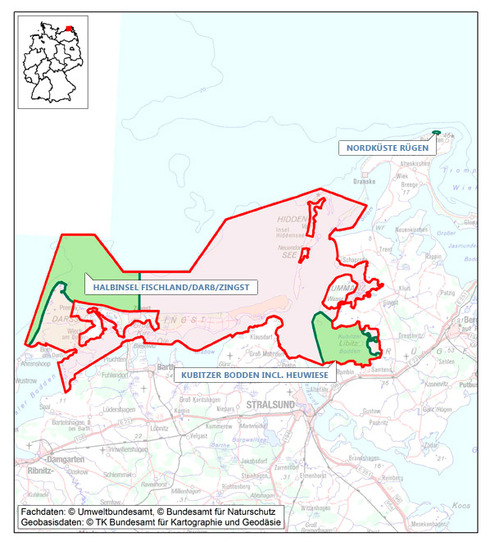 National Park in the largest brackish water (Bodden) habitat of the world.

The Bodden National Park of Western Pomerania was established in 1990 to protect one of the most untouched stretches of the Baltic coast, including the Darß/Zingst peninsula, the islands of Werder, Bock and Hiddensee, the west coast of Rügen Island and 687 km2 of water.

The overall surface area of the National Park is 805 km2, divided into two zones. Zone I embraces areas dominated by nearly natural landscapes with scarcely any economic activity, while the remaining terrain combines to form Zone II.

The Bodden is regarded as one of the few remaining natural landscapes in Central Europe still extant. This is natural shoreline which undergoes permanent change.

The landscape was created about 6000 years ago when the sea advanced and flooded previously dry terrain, leaving hill ridges as islands. The sea has constantly eroded these formations, depositing the material elsewhere as sandbanks, spits of land and peninsulas. The coastline essentially acquired its present contours about 4000 years ago, although in more recent times Darß/Zingst, Hiddensee and Rügen have gradually been growing closer together.

Nowhere else on the Baltic coast is this typology so distinct, with an abundance of alternating cliff and flat shoreline, spits, beach-lined lakes, shallow marine inlets (or bodden), windy flats, sandy dunes and beaches, all in close proximity.