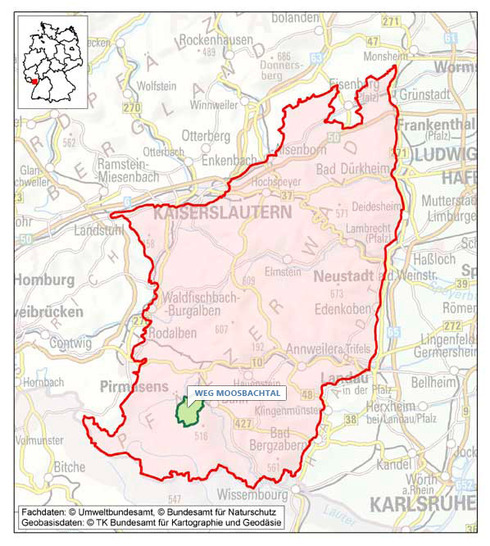 The Palatinate Forest is the largest closed upland forest in Germany. Together with the northern Vosges Mountains it forms the largest contiguous forest in Western Europe. Approx. 75% of the area is afforested whereby conifers - mainly pine - account for about 70% of the trees. There are, however, also forests of European chestnut, beech and oak.

Although large parts of the Palatinate Forest are heavily influenced by forestry, it embraces a broad spectrum of habitats worthy of protection, notably expanses of rock, calcareous grassland, wetlands and siltation areas around bodies of standing water. Even peat bogs and forests characteristic for the continental climate zones can be found in the Palatinate Forest because of its special climatic conditions.

Biogeographically fascinating is the parallel occurrence of continental and Atlantic species.

The sampling area covers 1,798 km2 and is situated in the German part of the biosphere reserve.
Important characteristics of the area include: