Cyclic volatile methylsiloxanes (cVMS) are widely applied chemicals used as intermediates in the production of silicon polymers or as ingredients in personal care products. cVMS are under scrutiny due to their environmental properties and their potential for long-range atmospheric transport, persistence and food web magnification. In 2018, the cVMS octamethylcyclotetrasiloxane (D4), decamethylcyclopentasiloxane (D5) and dodecamethylcyclohexasiloxane (D6) were identified as Substances of Very High Concern (SVHC) under the European REACH regulation. To obtain current data on the presence of cVMS in German waters, the spatial and temporal occurrence of D4, D5 and D6 in fillets of bream from major rivers archived in the German Environmental Specimen Bank (ESB) was analyzed with a GC-ICP-MS/MS coupling method. The spatial comparison of 17 sites for the year 2017 revealed that highest cVMS burdens occurred in samples from the Saar river (near to the French/German border). cVMS levels in fish from a lake in northern Germany did not exceed the limits of detection. For selected sites, time series covering the period from 1995 to 2017 were investigated. In most years D5 concentrations in fish were clearly higher than the observed D4 and D6 concentrations. Overall maximum D4 and D5 concentrations (about 320 and 7600 ng g−1 wet weight, respectively) were found at one Saar site in 2009. In three of five analyzed time series D5 concentrations peaked 2007–2011. In recent years, cVMS levels in fish decreased at almost all sites. To allow an assessment of the relevance of the detected cVMS fish concentrations these were compared to environmental quality standards (EQS) for D4 and D5 which were recently enacted in the context of the Swedish implementation of the European Water Framework Directive (WFD). The D5 EQS in fish was exceeded at four sites in several years in the investigated period and in the Saar even till 2017. 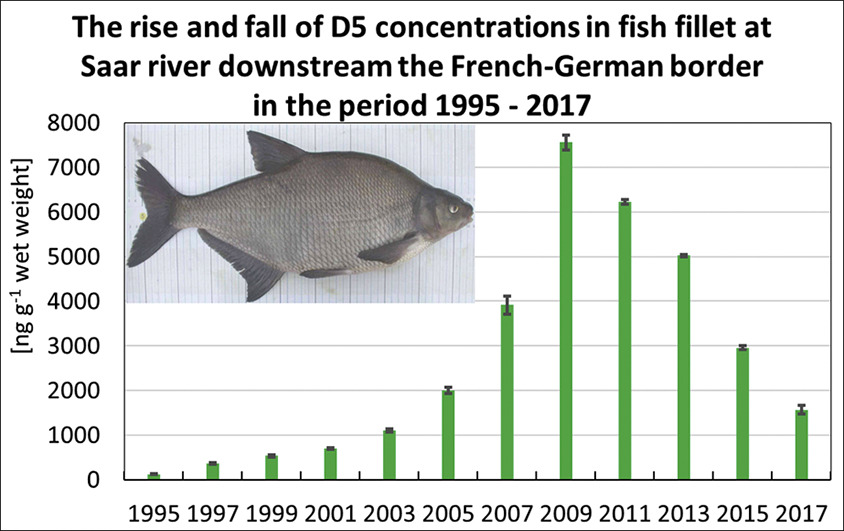