Bioaccumulation of persistent and hydrophobic organic compounds in the aquatic environment puts secondary consumers, such as fish, at risk. To assess their exposure, monitoring programs with high numbers of individuals have been conducted worldwide over decades that require major efforts and raise ethical issues. This study aimed at testing suspended particulate matter (SPM) as an alternative and accessible abiotic matrix to estimate the internal exposure concentrations of such chemicals in fish and mussels. Muscle tissues of bream (Abramis brama), tissues of zebra mussels (Dreissena polymorpha) and SPM were collected from four major German rivers, Elbe, Danube, Saar and Saale, in 2018 within the national monitoring program of the German Environmental Specimen Bank. We used (i) total solvent extraction for biota samples to quantify the lipid-normalized concentrations of polychlorinated biphenyls, polycyclic aromatic hydrocarbons and hexachlorobenzene and (ii) passive equilibrium sampling of SPM to derive equilibrium partitioning concentrations in lipids and (iii) set these independent data sets into context. Since the ratio of lipid-normalized concentration / equilibrium partitioning concentration in lipids was in most cases < 1.0, SPM may serve as a conservative proxy for the internal concentration of bream and mussels, although bream of high age (i.e., older than 10 years) showed a tendency for this ratio to exceed 1.0. This observation indicates that age-dependent biomagnification can exceed the predictions based on thermodynamic equilibrium relative to SPM. 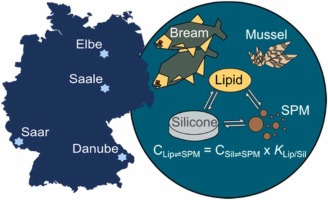